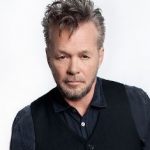 John J Mellencamp, previously known as Johnny Cougar, John Cougar, and John Cougar Mellencamp was born in Seymour, Indiana, USA. He is an American singer-songwriter, musician and actor. He studied at Vincennes University. He is known for his catchy, populist brand of heartland rock, which emphasizes traditional instrumentation. His singles list shown below: "Hurts So Good", "Jack & Diane", "Crumblin' Down", "Pink Houses", "Lonely Ol' Night", "Small Town", "R.O.C.K. in the U.S.A.", "Paper in Fire", and "Cherry Bomb". He has won one Grammy Award for Best Male Rock Performer for "Hurts So Good" in 1983 and has been nominated for 12 others. His biggest musical influences are Bob Dylan, Woody Guthrie, James Brown and the Rolling Stones. His role in several films include: Falling from Grace (also director and musician), Madison (only voice), After Image, and Lone Star State of Mind.