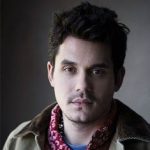 John Clayton Mayer was born in Bridgeport, Connecticut, USA. He is an American singer-songwriter and guitarist. He studied at Berklee College of Music in Boston. After his appearance at the 2001 South by Southwest Festival, he was signed to Aware Records, and then Columbia Records, which released his first EP, Inside Wants Out. His albums list shown below: Room for Squares (singles: "No Such Thing", "Your Body Is a Wonderland"- Grammy Award for Best Male Pop Vocal Performance 2002, and "Why Georgia"), Heavier Things (singles: "Bigger Than My Body", "Clarity", and "Daughters"- Grammy Award for Song of the Year 2005, Grammy Award for Best Male Pop Vocal Performance 2005), Continuum (singles: "Waiting on the World to Change", "Belief", "Gravity", "Dreaming with a Broken Heart", and "Say"), Battle Studies (singles: "Who Says" and "Heartbreak Warfare"), Born and Raised (singles: "Shadow Days" and "Queen of California"), Paradise Valley (singles: "Paper Doll" and "Who You Love"), The Search for Everything (singles: "Love on the Weekend" and "Still Feel Like Your Man").