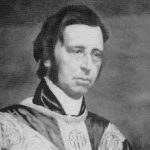 John Mason Neale was born in London, England. He was an Anglican priest, scholar, hymn writer and translator. He earned a BA degree from Trinity College, Cambridge in 1840. While at Cambridge, he moved from an evangelical to a strongly Anglican religious orientation. He helped found the Cambridge Camden Society, which later became the Ecclesiological Society, at Cambridge in 1839; the group’s main goal was to align church architecture, decoration, and ritual with its teaching. He was ordained a deacon in 1841 and a priest in 1842. Neale’s interest in Eastern Christianity led him to translate Hymns of the Eastern Church, though he translated many other kinds of hymns, including from Latin, for Anglican use. He is best remembered as a hymnist whose collections include Hymns for Children, Hymns for the Sick, Carols for Christmas-tide, and Carols for Easter-tide. He wrote several books include: Hymns of the Eastern Church, A History of the Holy Eastern Church, and Seatonian poems.