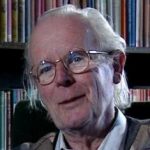 John Maynard Smith was born in London, England. He was a British evolutionary biologist and geneticist. He was instrumental in the application of game theory to evolution and theorised on other problems such as the evolution of sex and signalling theory. He studied aeronautical engineering at Trinity College Cambridge. He also studied fruit fly genetics under J. B. S. Haldane. After graduating he became a lecturer in Zoology at the University College London between 1952 and 1965, where he directed the Drosophila lab and conducted research on population genetics. In 1962, he was one of the founding members of the University of Sussex. He wrote several books include: The Theory of Evolution, Mathematical ideas in biology, The Evolution of Sex, Evolution and the Theory of Games, The Major Transitions in Evolution (with Eörs Szathmáry), The origins of life, and Animal Signals (with David Harper). He was elected a Fellow of the Royal Society in 1977. He received many awards, including Darwin Medal, Frink Medal, Balzan Prize, Linnean Medal, Royal Medal, Crafoord Prize, Copley Medal, Kyoto Prize, and Darwin-Wallace Award.