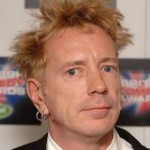 John Joseph Lydon, also known by his stage name Johnny Rotten was born in Holloway, London, England. He is an English singer, songwriter and musician. He is best known as the lead singer of the late 1970s British punk band the Sex Pistols, which lasted from 1975 until 1978, and again for various revivals during the 1990s and 2000s. He is also the lead singer of post-punk band Public Image Ltd, which he founded and fronted from 1978 until 1993, and again since 2009. With the Sex Pistols, he penned singles including "Anarchy in the U.K.," "God Save the Queen," and "Holidays in the Sun." With the Public Image Ltd, he penned singles including "Public Image", "Death Disco", and "Rise." He has written two autobiographies Rotten: No Irish, No Blacks, No Dogs and Anger is an Energy. His role in several films include: The Great Rock 'n' Roll Swindle, The Independent, and Song to Song.