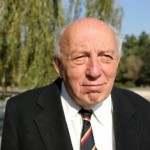 John Adalbert Lukacs was born in Budapest, Hungary. He is a Hungarian-born American historian. He was a professor of history at Chestnut Hill College and held the chair of that history department. He is a former president of the American Catholic Historical Association and member of the Royal Historical Society. He has written several books include: new history of the Cold War, Remembered past, The Last European War, The passing of the modern age, A new republic, Budapest 1900, The Duel, The Hitler of History, A Thread of Years, Five days in London-May 1940, At the end of an age, Democracy and Populism, June 1941: Hitler and Stalin, The Legacy of the Second World War, The future of history, and A Short History of the Twentieth Century.