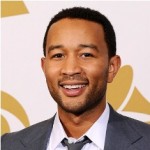 John Roger Stephens, known professionally as John Legend was born in Springfield, Ohio, USA. He is an American singer, songwriter and actor. He studied English with an emphasis on African-American literature from the University of Pennsylvania. His albums list shown below: Get Lifted (singles: "Used to Love U", "Ordinary People", "Number One", and "So High"), Once Again (singles: "Save Room", "Heaven", "Stereo", and "Show Me"), Evolver (singles: "Green Light", "If You're Out There", and "Everybody Knows"), Love in the Future (singles: "Made to Love" and "All of Me"), and Darkness and Light (singles: "Love Me Now", "Penthouse Floor", and "Surefire"). His role in several films include: Loverboy, Soul Men, and La La Land. For his solo work, he earned a Billboard Hot 100 number-one single with "All of Me" in 2013. He won the Academy Award for Best Original Song in 2015 for writing the song "Glory" from the film Selma. He has also won ten Grammy Awards and a Golden Globe Award.