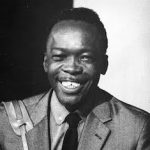 John Lee Hooker was born in Mississippi, USA. He was an American blues singer, songwriter and guitarist. The son of a sharecropper, he rose to prominence performing an electric guitar-style adaptation of Delta blues. Some of his best known songs include "Boogie Chillen'", "Dimples", and "Boom Boom". Several of his later albums, including The Healer, Mr. Lucky, Chill Out, and Don't Look Back, were album chart successes in the U.S. and U.K. He was inducted into the Blues Hall of Fame in 1980, and the Rock and Roll Hall of Fame in 1991. He won Grammy Awards, including Best Traditional Blues Recording, 1990, for I'm in the Mood (with Bonnie Raitt), Best Traditional Blues Album, 1995, for Chill Out, Best Traditional Blues Recording, 1998, for Don't Look Back, and Best Pop Collaboration with Vocals, 1998, Don't Look Back (with Van Morrison). He was awarded the Grammy Lifetime Achievement Award in 2000.