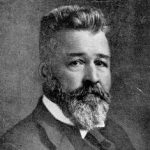 John Jay Chapman was born in New York City, New York, USA. He was an American author, essayist, poet and lawyer. He studied at Harvard University and Harvard Law School. He was admitted to the bar in 1888, and practiced law until 1898. He lectured on the need for reform and edited the journal The Political Nursery from 1897-1901. He wrote several books include: Emerson and Other Essays, Causes and Consequences (essays), Practical agitation, Four Plays for Children, The Maid's Forgiveness (play), A Sausage from Bologna (drama), Learning and other essays, The treason & death of Benedict Arnold (drama), Neptune's Isle and Other Plays for Children, William Lloyd Garrison (biography), Greek Genius, and Other Essays, Notes on Religion, Memories and milestones, Cupid and psyche, Songs and Poems (poetry), and A glance toward Shakespeare.