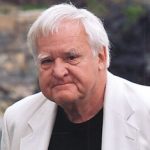 John William Jakes was born in Chicago, Illinois, USA. He is an American writer, best known for American historical fiction. He has used the pen name Jay Scotland. He studied creative writing at DePauw University, Greencastle, graduating in 1953. He earned an M.A. degree in American literature from the Ohio State University. He has written several novels include: The Bastard, The Rebels, The Seekers, The Furies, The Titans, The Warriors, The Lawless, The Americans, North and South, Love and War, Heaven and Hell, and Brak the Barbarian.