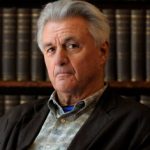 John Winslow Irving was born in Exeter, New Hampshire, USA. He is an American novelist and screenwriter. He earned a BA degree from the University of New Hampshire in 1965. He earned an MFA degree from the University of Iowa in 1967. In 1975, he accepted a position as assistant professor of English at Mount Holyoke College. He has written several novels include: Setting Free the Bears, The Water-Method Man, The Water-Method Man, The World According to Garp, The Hotel New Hampshire, The Cider House Rules, A Prayer for Owen Meany, A Son of the Circus, A Widow for One Year, The Fourth Hand, Until I Find You, Last Night in Twisted River, In One Person, and Avenue of Mysteries. He has written other books include: The imaginary girlfriend (memoir), Trying to Save Piggy Sneed (short story collection), and My Movie Business (memoir). He has written several films include: The World According to Garp, The Hotel New Hampshire, Simon Birch, The Cider House Rules (Won- Academy Award for Best Adapted Screenplay), and The Door in the Floor.