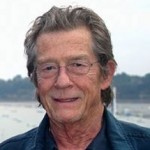 Sir John Vincent Hurt was born in Chesterfield, Derbyshire, England. He was an English actor. He was regarded as one of Britain's finest actors; director David Lynch described him as "simply the greatest actor in the world". In 1960, he won a scholarship to Royal Academy of Dramatic Art, where he trained for two years. His role in several films include: The Wild and the Willing, A Man for All Seasons, 10 Rillington Place, Midnight Express (Won- Golden Globe Award for Best Supporting Actor, BAFTA Award for Best Actor in a Supporting Role. Nominated- Academy Award for Best Supporting Actor), Alien, The Elephant Man (Won- BAFTA Award for Best Actor in a Leading Role, Nominated- Academy Award for Best Actor, Golden Globe Award for Best Actor), Champions, The Hit, Nineteen Eighty-Four, White Mischief, Scandal, The Field, Love and Death on Long Island, Lost Souls, The Proposition, V for Vendetta, 44 Inch Chest, In Love with Alma Cogan, Hercules, The Journey, That Good Night, and My Name Is Lenny. His role in television include: The Naked Civil Servant (Won- British Academy Television Award for Best Actor), I, Claudius (TV series), The Storyteller (TV series), Great Moments in Aviation (TV film), Recount (TV series), An Englishman in New York (Won- Berlin International Film Festival- Teddy Award), and The Last Panthers (crime drama TV series). In 2012, he was honoured with the Lifetime Achievement BAFTA Award, in recognition of his "outstanding contribution to cinema". He was knighted in 2015 for his services to drama.