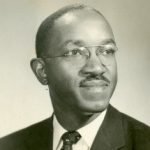 John Hope Franklin was born in Rentiesville, Oklahoma, USA. He was an American historian. He is best known for his work From Slavery to Freedom, first published in 1947, and continually updated. More than three million copies have been sold. He earned a BA degree from Fisk University, Nashville in 1935. He earned an MA degree in 1936, and received his PhD in history in 1941 both from Harvard University. His teaching career began at Fisk University. He taught at St. Augustine's College, North Carolina College for Negroes, and Howard University. In 1956, he was selected to chair the history department at Brooklyn College. He served as professor of history at the University of Chicago. In 1983, he was appointed as the James B. Duke Professor of History at Duke University. He was also Professor of Legal History at the Duke University Law School from 1985 to 1992. He was the president of American Historical Association, Southern Historical Association, and Phi Beta Kappa Society. In 1995, he was awarded the Spingarn Medal from the NAACP. In 1995, President Bill Clinton awarded Franklin the Presidential Medal of Freedom, the nation's highest civilian honor. He wrote other books include: Reconstruction after the Civil War, The Emancipation proclamation, Racial Equality in America, George Washington Williams (Nominations- Pulitzer Prize for Biography), Race and History, The Color Line, and Mirror to America (autobiography).