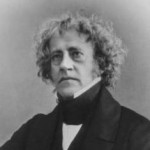 Sir John Frederick William Herschel was born in Slough, Buckinghamshire, England. He was an English mathematician, astronomer, chemist, inventor and experimental photographer who also did valuable botanical work. He originated the use of the Julian day system in astronomy. He named seven moons of Saturn and four moons of Uranus. He made many contributions to the science of photography, and investigated colour blindness and the chemical power of ultraviolet rays. He studied at Eton College and St John's College, Cambridge, graduating as Senior Wrangler in 1813. He discovered sodium thiosulfate to be a solvent of silver halides in 1819. He was one of the founders of the Royal Astronomical Society in 1820. He was made a Knight of the Royal Guelphic Order in 1831. He served as President of the Royal Astronomical Society three times. He wrote several books include: A Treatise on Astronomy, and Outlines of Astronomy. He received many awards include: Gold Medal of the Royal Astronomical Society (1826, 1836), Smith's Prize, Lalande Medal, Copley Medal, and Royal Medal (1833, 1836, 1840).