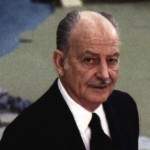 John Hench was born in Cedar Rapids, Iowa, USA. He was an American animator, artist, designer and creator. He was an employee of The Walt Disney Company for more than 65 years, during which saw the creation of nearly every Disney animated feature and theme park. He studied at Otis College of Art and Design in Los Angeles, the San Francisco Art Institute in San Francisco, and the Chouinard Art Institute in Los Angeles. He was respected by Walt Disney as one of the studio's most gifted artists and teamed him with Salvador Dalí on the animated short Destino, a project begun in 1945 that was not completed and released until 2003. By 1954, he was in the studio's live action department, as lead developer of the hydraulic giant squid in 20,000 Leagues Under the Sea, helping to win an Academy Award for Best Special Effects for the film. He led the design for Tomorrowland, the Adventureland buildings and walkways, New Orleans Square and the Snow White Grotto. He also designed Space Mountain, and Cinderella Castle at the Magic Kingdom and Tokyo Disneyland. In 1990, he received the Disney Legend award, the company's highest honor, presented to him by Michael Eisner.