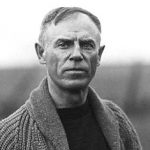 John William Heisman was born in Cleveland, Ohio, USA. He was an American football player and coach. At different times, he served as the head football coach at Oberlin College, Buchtel College, Auburn University, Clemson University, Georgia Tech, the University of Pennsylvania, Washington & Jefferson College, and Rice University. He was also the head basketball coach at Georgia Tech, tallying a mark of 9–14, and the head baseball coach at Buchtel, Clemson, and Georgia Tech, amassing a career college baseball record of 219–119–7. He was president of the Atlanta Crackers baseball team. He was inducted into the College Football Hall of Fame as a coach in 1954. The Heisman Trophy, awarded annually to the season's most outstanding college football player, is named after him.