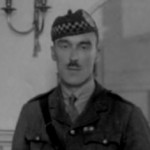 John Hay Beith was born in Rusholme, Manchester, England. He was a British teacher and army officer, but he is best remembered as a novelist, playwright and screenwriter who wrote under the pen name Ian Hay. He studied at Fettes College, Edinburgh and St John's College, Cambridge. After graduating with a second class degree, he held temporary teaching posts at Charterhouse and Fettes. He joined Durham School in 1902 as junior science master; he also coached the rugby and boating crews. On the outbreak of war in 1914 he joined the army as a second lieutenant in the Argyll and Sutherland Highlanders. In 1916, he was awarded the Military Cross for his conduct in the Battle of Loos. His energy and success were rewarded by a CBE and promotion to the rank of major. He wrote several novels include: Pip, A Knight on Wheels, The Willing Horse, Scally, and Housemaster. He wrote several plays include: The Sport of Kings, Tilly of Bloomsbury, and Housemaster. He wrote several films include: Tommy Atkins, The Middle Watch, I Was a Spy, The 39 Steps, Me and Marlborough, Secret Agent, and Keep Your Seats, Please.