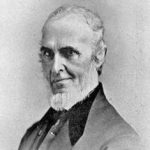 John Greenleaf Whittier was born in Haverhill, Massachusetts, USA. He was an American poet, editor and activist. He is remembered particularly for his anti-slavery writings as well as his book Snow-Bound. He was editor of the prominent New England Weekly Review in Hartford, Connecticut, the most influential Whig journal in New England. In 1833, he published The Song of the Vermonters, 1779, which he had anonymously inserted in The New England Magazine. During the 1830s, he became interested in politics but, after losing a Congressional election at age twenty-five, he suffered a nervous breakdown and returned home. In 1833, he published the antislavery pamphlet Justice and Expediency, and from there dedicated the next twenty years of his life to the abolitionist cause. He wrote other poems include: Lays of My Home, Voices of Freedom, Maud Muller, Miriam and Other Poems, Poems of Nature, and At Sundown.