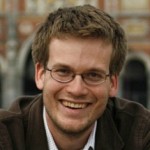 John Michael Green was born in Indianapolis, Indiana, USA. He is an American novelist, vlogger, writer and TV producer. He earned a BA degree with a double major in English and religious studies from Kenyon College in 2000. He has written several novels include: Looking for Alaska (Won- Printz Award for debut novel 2006), An Abundance of Katherines, Let It Snow (with Maureen Johnson, Lauren Myracle), Paper Towns (Won- Edgar Allan Poe Award for Best Young Adult Novel 2009, Corine Literature Prize for Young Adult Novel 2010), Will Grayson, Will Grayson (with David Levithan), The Fault in Our Stars, and Turtles All the Way Down. Aside from being a novelist, he is also well known for his YouTube ventures. In 2007, he launched the VlogBrothers channel with his brother, Hank Green. He married Sarah Urist Green in 2006. They have two children: Henry and Alice.