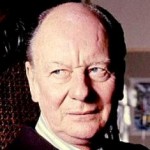 Sir Arthur John Gielgud was born in South Kensington, London, England. He was an English actor and theatre director. With Ralph Richardson and Laurence Olivier, he was one of the trio of actors who dominated the British stage for much of the 20th century. He studied at Royal Academy of Dramatic Art. During the 1930s Gielgud was a stage star in the West End and on Broadway, appearing in new works and classics. He began a parallel career as a director, and set up his own company at the Queen's Theatre, London. He was also known for high comedy roles such as John Worthing in The Importance of Being Earnest. He was best known in the theatre for his one-man Shakespeare show Ages of Man. His role in several films include: The Good Companions, Julius Caesar, Becket (Nominated- Academy Award for Best Supporting Actor), Caligula, The Elephant Man, Arthur (Won- Academy Award for Best Actor in a Supporting Role, Golden Globe award for Best Supporting Actor), Gandhi, Hamlet, and Elizabeth. Among his honours, he was knighted in 1953 and the Gielgud Theatre was named after him. From 1977 to 1989, he was president of the Royal Academy of Dramatic Art.