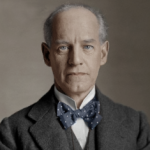 John Galsworthy was born in Kingston Hill, Surrey, England. He was an English novelist and playwright. Notable works include The Forsyte Saga and its sequels, A Modern Comedy and End of the Chapter. He won the Nobel Prize in Literature in 1932. He studied at Harrow and New College, Oxford. He took a Second in Law at Oxford in 1889, then trained as a barrister and was called to the bar in 1890. He married Ada Pearson in 1905. He wrote several novels include: Jocelyn, The Man of Property, The Patrician, The Freelands, In Chancery, Awakening , To Let, The White Monkey, and Maid in waiting. He wrote several plays include: The Silver Box, Strife, Justice, and Loyalties.