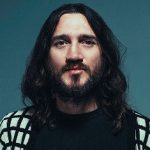 John Anthony Frusciante was born in Queens, New York City, New York, USA. He is an American guitarist, singer and songwriter. He is best known as the former guitarist of the rock band Red Hot Chili Peppers from 1988 until 1992, and again from 1998 until 2009. His albums list (with Red Hot Chili Peppers band) shown below: Mother's Milk, Blood Sugar Sex Magik, Californication, By the Way, and Stadium Arcadium. His other albums list shown below: Smile from the Streets You Hold, To Record Only Water for Ten Days, From the Sounds Inside, Shadows Collide with People, The Will to Death, Inside of Emptiness, Curtains, Enclosure, and Trickfinger. He has received critical recognition for his guitar playing, ranking at number 18 on Rolling Stone's list of "The 100 Greatest Guitarists of All Time" in 2003. He was ranked as number 42 in Gibson's list of the "50 Best Guitarists of All Time".