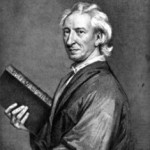 John Evelyn was born in Wotton, Surrey, England. He was an English author, gardener and diarist. He is the author of some 30 books on the fine arts, forestry, and religious topics. His Diary, kept all his life, is considered an invaluable source of information on the social, cultural, religious, and political life of 17th-century England. He was educated at Balliol College, Oxford. He was known for his knowledge of trees, and had a friend and correspondent, Philip Dumaresq, who "devoted most of his time to gardening, fruit, and tree culture." He married Mary Browne, daughter of Sir Richard Browne the English ambassador in Paris in 1647. He served on a council for colonial affairs from 1671 to 1674. He was appointed to the council of the Royal Society by its first and second charters in 1662 and 1663 and remained a lifelong member. He wrote several books include: Fumifugium, Numismata, and Acetaria.