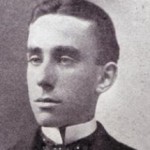 John Erskine was born in New York City, New York, USA. He was an American educator, author, pianist, composer and screenwriter. He earned a BA degree in 1900, and an MA degree in 1901 both from Columbia University. He received his PhD in 1903 from Columbia University. He was an English professor at Amherst College from 1903 to 1909, and subsequently taught at Columbia University from 1909 to 1937. He wrote several books include: The kinds of poetry, The Moral Obligation to Be Intelligent (essay), Democracy and ideals, The literary discipline, private life of Helen of Troy (novel), Sonata and Other Poems, Uncle Sam in the eyes of his family (novel), The complete life, The Human Life of Jesus, My life as a teacher, and My Life in Music. He wrote several films include: A Lady Surrenders, and Diane. He was the first president of the Juilliard School of Music from 1928 to 1937. He was also director of the Metropolitan Opera Association.