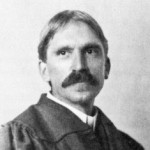 John Dewey was born in Burlington, Vermont, USA. He was an American philosopher, psychologist and educator. He is one of the primary figures associated with the philosophy of pragmatism and is considered one of the fathers of functional psychology. A Review of General Psychology survey, published in 2002, ranked Dewey as the 93rd most cited psychologist of the 20th century. A well-known public intellectual, he was also a major voice of progressive education and liberalism. He graduated from the University of Vermont in 1879. He received his PhD from Johns Hopkins University. He served as professor at the University of Michigan, the University of Minnesota, the University of Chicago. He served as professor of philosophy at Columbia University from 1904-1930. He wrote several books include: The School and Society, The child and the curriculum, How We Think, Democracy and Education, Reconstruction in philosophy, Human nature and conduct, Experience and Nature, The Quest for Certainty, Art as Experience, Logic, the theory of inquiry, Experience and Education, and Freedom and Culture.