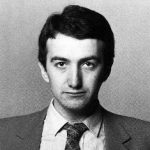 John Richard Deacon was born in Leicester, England. He is an English bassist, composer and songwriter, best known for being the bass guitarist for the rock band Queen. He composed several singles for the group-including Top 10 hits "You're My Best Friend", "Another One Bites the Dust", "Back Chat", and "I Want to Break Free"-and was involved in the band's financial management. He studied at Electronic Engineering, Chelsea College, University of London. His albums list (with rock band Queen) shown below: Queen, Queen II, Sheer Heart Attack, A Night at the Opera, A Day at the Races, News of the World, Jazz, The Game, Hot Space, The Works, A Kind of Magic, The Miracle, Innuendo, and Made in Heaven.