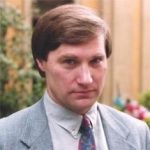 John David Barrow was born in London, England. He is an English theoretical physicist and mathematician. He earned his first degree in mathematics and physics from Van Mildert College at the University of Durham in 1974. He received his PhD in astrophysics from Magdalen College, Oxford in 1977. He served as a professor and Director of the Astronomy Centre at the University of Sussex in 1981, and Professor in the Department of Applied Mathematics and Theoretical Physics at Cambridge University in 1999. He was Gresham Professor of Astronomy from 2003–2007, and appointed as Gresham Professor of Geometry from 2008–2011 both at Gresham College, London. He received many awards, including Templeton Prize, Michael Faraday Prize, Kelvin Prize, Dirac Medal, and Gold Medal of the Royal Astronomical Society. He has writting several books, including New Theories of Everything, Pi in the sky, The Origin of the Universe, The artful universe, Impossibility, The Book of Nothing, The Constants of Nature, The Infinite Book, Cosmic Imagery, and The Book of Universes.