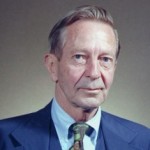 John William Cheever was born in Quincy, Massachusetts, USA. He was an American novelist and short story writer. He studied at Thayer Academy, a private day school, and Quincy High School, Massachusetts. He is "now recognized as one of the most important short fiction writers of the 20th century." He wrote several novels include: The Wapshot Chronicle (Won- National Book Award for Fiction in 1958), The Wapshot Scandal (Won- William Dean Howells Medal in 1965), Bullet Park, Falconer, and Oh What a Paradise It Seems (novella). He wrote several short stories include: The Way Some People Live, The Enormous Radio, The Five-Forty-Eight, Reunion, The Brigadier and the Golf Widow, The World of Apples (Nominations: National Book Award for Fiction), The Stories of John Cheever (Won- Pulitzer Prize for Fiction in 1979, National Book Critics Circle Award in 1979), and The Swimmer.