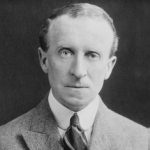 John Buchan was born in Perth, Scotland. He was a Scottish novelist, historian, lawyer, poet and Unionist politician. He served as the 15th Governor General of Canada from 1935-1940. He studied at the University of Glasgow and Brasenose College, Oxford. He won both the Stanhope essay prize and the Newdigate Prize for poetry. He entered into a career in diplomacy and government after graduating from Oxford, becoming in 1901 the private secretary to Alfred Milner. In a 1927 by-election, he was elected as the Unionist Party Member of Parliament for the Combined Scottish Universities. He wrote several novels include: Prester John, The Thirty-Nine Steps, Salute to Adventurers, Greenmantle, The Power-House, Mr Standfast, The Path of the King, Huntingtower, Midwinter, The Three Hostages, The Dancing Floor, Witch Wood, Castle Gay, The Blanket of the Dark, The Gap in the Curtain, The Magic Walking Stick, A Prince of the Captivity, The House of the Four Winds, The Island of Sheep, and Sick Heart River.