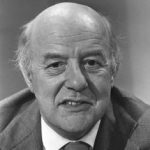 Sir John Betjeman was born in London, England. He was an English poet who described himself in Who's Who as a "poet and hack". He was Poet Laureate of the United Kingdom from 1972 until his death. He was a founding member of the Victorian Society and a passionate defender of Victorian architecture. He studied at Marlborough College, in Wiltshire, and Magdalen College, Oxford University. He wrote several poems include: Mount Zion, Continual Dew, Slough, Old Lights For New Chancels, New Bats in Old Belfries, A Few Late Chrysanthemums, Poems in the Porch, John Betjeman Collected Poems, High and Low, A Nip in the Air, and Church poems. He received many awards and honours, including Queen's Medal for Poetry, Commander of the Order of the British Empire, and Knight Bachelor.