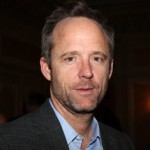 John Benjamin Hickey was born in Plano, Texas, USA. He is an American actor. He won the 2011 Tony Award for Best Performance by a Featured Actor in a Play for his performance as Felix Turner in The Normal Heart. He earned a bachelor's degree in English from Fordham University in 1985. His role in several films include: Only You, Eddie, The Ice Storm, The Bone Collector, The Anniversary Party, Flightplan, Infamous, Freedom Writers, The Taking of Pelham 123, Pitch Perfect, Get on Up, Truth, Tallulah, Hostiles, and Forever My Girl (upcoming film). His role in television include: The Lady in Question (TV film), It's All Relative (Sitcom), Silver Bells (TV film), Living Proof (TV film), The Big C (Nominated- Primetime Emmy Award for Outstanding Supporting Actor in a Miniseries or a Movie), Manhattan (TV series), and The Immortal Life of Henrietta Lacks (TV film).