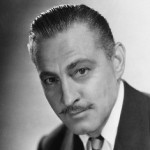 John Barrymore was born in Philadelphia, Pennsylvania, USA. He was an American actor on stage, screen and radio. He began his career in 1903 and first gained attention as a stage actor in light comedy, then high drama, culminating in productions of Justice, Richard III and Hamlet; his portrayal of Hamlet led to him being called the "greatest living American tragedian". After a success as Hamlet in London in 1925, he left the stage for 14 years and instead focused entirely on films. His role in several films include: Dr. Jekyll and Mr. Hyde, Sherlock Holmes, The Sea Beast, When a Man Loves, Tempest, Eternal Love, Svengali, Grand Hotel, Dinner at Eight, Twentieth Century, Maytime, True Confession, Bulldog Drummond's Peril, Spawn of the North, Midnight, The Great Profile, and The Invisible Woman.