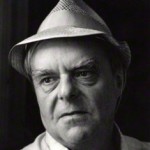 John Barrington Wain was born in Stoke-on-Trent, Staffordshire, England. He was an English poet, novelist, literary critic and professor. For most of his life, he worked as a freelance journalist and author, writing and reviewing for newspapers and the radio. He earned a BA degree in 1946, and an MA degree in 1950 both from St. John's College, Oxford. He was a lecturer in English literature at the University of Reading from 1949 to 1955, and was professor of poetry at Oxford from 1973 to 1978. He wrote several poems, including Mixed Feelings, A Word Carved on a Sill, Weep Before God, Wildtrack, Letters to Five Artists, Feng, The twofold, and Open Country. He wrote several novels include: Hurry on Down, A Travelling Woman, Strike the Father Dead, The smaller sky, A Winter in the Hills, The pardoner's tale, Lizzie's Floating Shop, and Young Shoulders (Won- Whitbread book Prize).