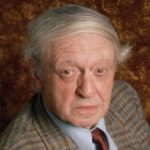 John Anthony Burgess Wilson (published under the pen name Anthony Burgess) was born in Harpurhey, Lancashire, England. He was an English novelist, teacher, translator, literary critic and composer. He wrote librettos and screenplays, including for the 1977 TV mini-series Jesus of Nazareth. He worked as a literary critic for several publications, including The Observer and The Guardian. A versatile linguist, he lectured in phonetics, and translated Cyrano de Bergerac, Oedipus Rex and the opera Carmen, among others. He also composed over 250 musical works. He studied at Victoria University of Manchester. He taught in the extramural department of Birmingham University from 1946–1950. In late 1950, he began working as a secondary school teacher at Banbury Grammar School teaching English literature. He wrote several novels include: Time for a Tiger, Beds in the East, The Right to an Answer, The Doctor Is Sick, The Worm and the Ring, A Clockwork Orange, The Wanting Seed, Honey for the Bears, A Vision of Battlements, Beard's Roman Women, Abba Abba, Man of Nazareth, The Kingdom of the Wicked, and Byrne.