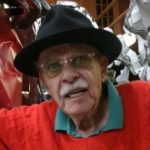 John Angus Chamberlain was born in Rochester, Indiana, USA. He was an American sculptor. He studied at the Art Institute of Chicago and Black Mountain College. He is best known for creating sculptures from old automobiles that bring the Abstract Expressionist style of painting into three dimensions. He began by carving and modelling, but turned to working in metal in 1952 and welding 1953. His art works list shown below: Shortstop, Untitled, Big E, Jackpot, Phonetic Shortcut, Littlest Blue Moon, Memo to Mozart, Perhapsgravity, Flywheelsonata, Mezzomangle, Pastoraldebris, Frostydickfantasy, Piquanthearing, Mermaidmischief, and Pineapplesurprise. His first major solo show was held at the Martha Jackson Gallery, New York, in 1960. His works have since been exhibited around the world and have been included in the São Paulo Art Biennial, the Whitney Biennial, and Documenta, Kassel, Germany. At the time of his death he resided and worked on Shelter Island, New York.