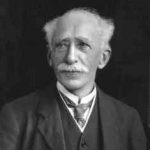 Sir John Ambrose Fleming was born in Lancaster, Lancashire, England. He was an English electrical engineer and inventor, known for inventing the first thermionic valve or vacuum tube. He also established the left hand rule. In 1932, along with Douglas Dewar and Bernard Acworth, he helped establish the Evolution Protest Movement. He earned a BS degree from the University College London in 1870. He studied chemistry at Imperial College London. He earned a D.Sc. degree from Cambridge in 1877. In 1884, he joined University College London taking up the Chair of Electrical Technology, the first of its kind in England. He was also consultant to the Marconi Wireless Telegraph Company, Swan Company, Ferranti, Edison Telephone, and later the Edison Electric Light Company. In 1892, he presented an important paper on electrical transformer theory to the Institution of Electrical Engineers in London. He received many awards, including Hughes Medal, Albert Medal, Faraday Medal, and Franklin Medal. He wrote several books include: Short lectures to electrical artisans, The alternate current transformer in theory and practice, Magnets and Electric Currents, and The Principles of Electric Wave Telegraphy.