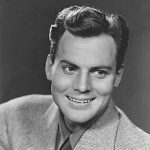 John George Agar, Jr. was born in Chicago, Illinois, USA. He was an American actor. He studied at Harvard School for Boys in Chicago, Lake Forest Academy in Lake Forest, Illinois, and Trinity-Pawling Preparatory School in Pawling, New York. His role in several films include: Fort Apache, Adventure in Baltimore, She Wore a Yellow Ribbon, Sands of Iwo Jima, Tarantula, The Mole People, The Brain from Planet Arous, Jet Attack, Revenge of the Creature, Flesh and the Spur, Of Love and Desire, Waco, Night Fright, King Kong, and Miracle Mile. During World War II, he joined the Navy Air Corps, later transferred to the United States Army Air Corps. He was a sergeant at the time he left the AAF in 1946.