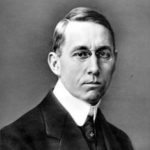 Johannes Vilhelm Jensen was born in Farsø, Denmark. He was a Danish author, novelist and poet. He was awarded the Nobel Prize in Literature in 1944 "for the rare strength and fertility of his poetic imagination with which is combined an intellectual curiosity of wide scope and a bold, freshly creative style". He studied medicine at the University of Copenhagen. After three years of studying he chose to change careers and devote himself fully to literature. He wrote poetry, a few plays, and many essays, chiefly on anthropology and the philosophy of evolution. He wrote several books include: Danskere, Einar Elkjær, The Fall of the King (novel), Den gotiske renæssance, Skovene, Hjulet, At Memphis Station, The Long Journey (series of six novels), Evolution og Moral, Digte (poems), and Tilblivelsen.