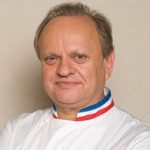 Joel Robuchon was born in Poitiers, France. He is a French chef and restaurateur. He was titled "Chef of the Century" by the guide Gault Millau in 1989. He also awarded the Meilleur Ouvrier de France in cuisine in 1976. He operates a dozen restaurants in Bangkok, Bordeaux, Hong Kong, Las Vegas, London, Macau, Monaco, Paris, Singapore, Taipei, and Tokyo. At 28, he was appointed as head chef at the hotel Concorde-Lafayette. He hosted Cuisinez comme un grand chef on TF1 from 1996 to 1999. He hosted Bon appétit bien sûr on France 3 in 2000. He has written several cookbooks include: Simply French (with Patricia Wells), L'atelier of Joël Robuchon (with Patricia Wells), La Cuisine de Joel Robuchon (with Nicolas de Rabaudy), The Complete Robuchon, Vegetables and Salad, Desserts, Cakes and Pastries, French Regional Food (with Loïc Bienassis), and My Best: Joël Robuchon.