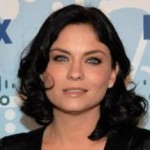 Jodi Lyn O'Keefe was born in Cliffwood Beach, New Jersey, USA. She is an American actress and model. She started her career as a model at the age of 8 years old, and she did some modeling work for a Jeans company. Her role in several films include: Halloween H20: 20 Years Later, She's All That, The Crow: Salvation, Whatever It Takes, Devil in the Flesh 2, Red Rover, Venice Underground, The Frozen Ground, and Merry ExMas. Her role in television include: Nash Bridges (police drama), Three Wise Guys (TV film), Prison Break (TV serial drama), Exposed (TV film), The Vampire Diaries (supernatural drama TV series), and Hit the Floor (sports drama TV series).