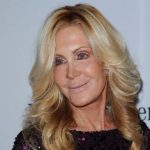 Joan Van Ark was born in New York City, New York, USA. She is an American actress, known for her role as Valene Ewing on the primetime soap opera Knots Landing. In 1971, she won a Theatre World Award and was nominated for the Tony Award for Best Featured Actress in a Play for the revival of The School for Wives. In 1985, she received a Daytime Emmy Award nomination as host of the Tournament of Roses Parade on CBS. She studied at Yale School of Drama. Her role in several films include: Frogs, The Last Dinosaur, Held for Ransom, Net Games, and Channels. Her role in television include: Temperatures Rising (TV series), My First Love (TV film), Always Remember I Love You (TV film), Dallas (TV series), Knots Landing (TV series, Soap Opera Digest Award for Best Actress in 1986 and 1989), The Young and the Restless (drama series), and Psycho Wedding Crasher (TV film).