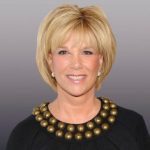 Joan Lunden was born in Fair Oaks, California, USA. She is an American journalist, television host, newscaster and author. She was the co-host of ABC's Good Morning America from 1980 to 1997. As of 2014, she is a special correspondent for NBC's Today. She earned a BA degree in Liberal Arts from California State University, Sacramento. She was a visiting instructor at Montclair State College in New Jersey, where she taught a course in broadcast journalism. She worked for Channel 3 (KCRA) and Radio as co-anchor of the daily noon television news program. Her most recent television shows include hosting DirectTV's series Hometown Heroes and the Emmy-winning special America's Invisible Children. She has written several books include: Good Morning I'm Joan Lunden (with Ardy Friedberg), Mother's Minutes, Your Newborn Baby, Joan Lunden's Healthy Cooking (with Laura Morton), Joan Lunden's Healthy Living, A Bend in the Road is Not the End of the Road (biography), Wake‑Up Calls, Growing Up Healthy, Chicken Soup for the Soul (with Amy Newmark), and Had I Known (memoir). Her role in several films include: What About Bob? and Conspiracy Theory. Her role in television include: Biography (TV series, guest host), Behind Closed Doors (documentary series, host), and Wickedly Perfect (reality show, host).