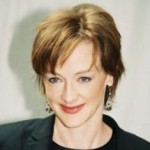 Joan Cusack was born in New York City, New York, USA. She is an American actress. She starred on the Showtime hit drama/comedy Shameless as Sheila Gallagher, a role for which she has received five consecutive Emmy Award nominations, winning for the first time in 2015. She is the sister of actress Ann and actor John Cusack. She studied at the University of Wisconsin-Madison. Her role in several films include: My Bodyguard, Sixteen Candles, The Allnighter, Working Girl (Nominated- Academy Award for Best Supporting Actress), My Blue Heaven, Nine Months, In & Out (Nominated-  Academy Award for Best Supporting Actress, Golden Globe Award for Best Supporting Actress), Arlington Road, High Fidelity, Looney Tunes, Ice Princess, My Sister's Keeper, Welcome to Me, Freaks of Nature, Snatched, and Unicorn Store. Her role in television include: Saturday Night Live, What About Joan?, and Peep and the Big Wide World (TV series, only voice, Nominated- Daytime Emmy Award for Outstanding Performer in an Animated Program). She is married to attorney Richard Burke, President and CEO of Envoy Global, Inc. They have two sons: Dylan John and Miles.