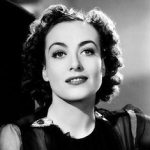 Joan Crawford was born in San Antonio, Texas, USA. She was an American actress who began her career as a dancer and stage showgirl. Her role in several films include: Montana Moon, Laughing Sinners, Possessed, Rain, Dancing Lady, I Live My Life, The Shining Hour, The Women, Susan and God, Above Suspicion, Mildred Pierce (Won- Academy Award for Best Actress), Sudden Fear, Female on the Beach, Autumn Leaves, The Best of Everything, What Ever Happened to Baby Jane?, The Caretakers, and Trog. Her role in television include: Della (TV film), and Night Gallery (TV film). She wrote several books include: A Portrait of Joan (autobiography) and My Way of Life.