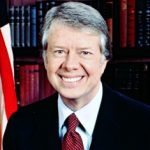 James Earl Carter Jr. (Jimmy Carter) was born in Plains, Georgia, USA. He is an American Democratic politician who served as the 39th President of the United States from 1977 to 1981. He served as the 76th Governor of Georgia from 1971-1975. He served in the Georgia State Senate from 1963 to 1967. In 2002, he was awarded the Nobel Peace Prize for his work with the Carter Center. He earned a BS degree from US Naval Academy, Annapolis in 1946. In 1943, he joined the United States Navy and served on submarines. He left the Navy later in 1953 to return to his home state Georgia, where he worked as a peanut farmer. He has written several books include: Why Not the Best?, A government as good as its people, Keeping Faith: Memoirs of a President, Everything to gain (with Rosalynn Carter), Talking peace, Living Faith, Sources of strength, An hour before daylight (memoir, Nominations: Pulitzer Prize for Biography or Autobiography), Christmas in Plains (memoir), and Palestine: Peace Not Apartheid. He married to Rosalynn Smith in 1946. They have three sons and one daughter.