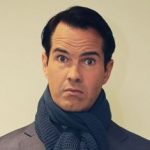 James Anthony Patrick Carr was born in Isleworth, London, England. He is an English stand-up comedian, television host and actor, known for his signature laugh, deadpan delivery, dark humour, and heckler interaction. He earned a BA degree from Gonville and Caius College, Cambridge University in 1994. He presented the 100s series of programmes for Channel 4. He was nominated for the 2006 Rose d'Or award for "Best Game Show Host". He won the 2006 British Comedy Award for "Best Live Stand up". His role in several films include: Alien Autopsy, Confetti, Stormbreaker, I Want Candy, and Telstar. His role in television (host) include: Your Face or Mine? (comedy game show), Distraction (game show), The Big Fat Quiz of the Year, and A Comedy Roast (comedy show). He is the author of book, entitled The Naked Jape.