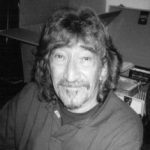 James Carl Inkanish, Jr., known professionally as Jimmy Carl Black was born in El Paso, Texas, USA. He was a drummer for The Mothers of Invention from 1964-1970. Best known for his work with Frank Zappa and original drummer in the first line-up of 'The Mothers', with his introductory line "Hi, boys and girls- I’m Jimmy Carl Black, and I’m the Indian of the group”. His albums list (with The Mothers of Invention) shown below: Freak Out!, Absolutely Free, We're Only in It for the Money, Cruising with Ruben & the Jets, Uncle Meat, Burnt Weeny Sandwich, and Weasels Ripped My Flesh. He worked as a drummer for other bands, including Geronimo Black, The Grandmothers, The Muffin Men, and The Farrell and Black Band.