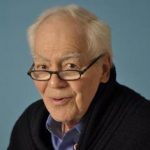 James Earle Breslin was born in Jamaica, Queens, New York City, New York, USA. He was an American columnist, author, novelist, actor and screenwriter. He worked as a columnist for many newspapers, including The New York Herald Tribune (1963-1968), The New York Post (1968-1969), The New York Daily News (1978-1988), and Newsday (1988-2004). He was known for his newspaper columns which offered a sympathetic viewpoint of the working-class people of New York City, and was awarded the 1986 Pulitzer Prize for Commentary "for columns which consistently champion ordinary citizens". He studied at Long Island University from 1948 to 1950. He wrote several books include: Sunny Jim, Can't Anybody Here Play This Game?, The world of Jimmy Breslin, The Gang That Couldn't Shoot Straight (novel), World Without End, Amen (novel), How the Good Guys Finally Won, Forty-Four Caliber (novel, with Dick Schaap), Forsaking All Others (novel), World According To Breslin, Table money (novel), He Got Hungry and Forgot His Manners, I want to thank my brain for remembering me (memoir), The Short Sweet Dream of Eduardo Gutierrez (biography), I don't want to go to jail, The Good Rat LP (True crime), and The Mafia Rat (True Story). His role in several films include: Summer of Sam, If Ever I See You Again, and I Go Pogo (only voice). He wrote several films include: The Gang That Couldn't Shoot Straight, and The Neighborhood.