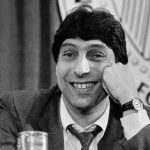 James Thomas Anthony Valvano, nicknamed Jimmy V was born in New York City, New York, USA. He was an American college basketball player, coach and broadcaster. He earned a BA degree in English from Rutgers University in 1967. From 1964-1967, he played point guard for Rutgers University. While the head coach at North Carolina State University, his team won the 1983 national title against improbable odds. He served as a basketball coach at the following schools: Johns Hopkins University, 1968-1969 (Assistant Coach); Bucknell University, 1972-1975 (Assistant Coach); Iona College, 1975-1980 (Head Coach); North Carolina State University, 1980-1990 (Head Coach). After his coaching career, he was a broadcaster for ESPN and ABC Sports, including a stint as a sideline reporter for the inaugural season of the World League of American Football. In 1992, he won a Cable ACE Award for Commentator/Analyst for NCAA basketball broadcasts. In 1993, he was inducted into the Rutgers Basketball Hall of Fame. In 2004, he was inducted into the National Italian American Sports Hall of Fame. He was married to Pamela Levine in 1967. They had three daughters- Nicole, Jamie, and Lee Ann. He is the author of book, entitled Valvano: They Gave Me a Lifetime Contract, and Then They Declared Me Dead (memoir). He died at age 47, less than two months after his famous ESPY speech, following a nearly year-long battle with metastatic cancer.