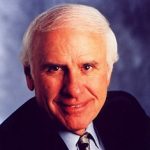 Emanuel James "Jim" Rohn was born in Yakima, Washington, USA. He was an American entrepreneur, author and motivational speaker. In 1955, he joined direct selling business AbundaVita as a distributor. In 1957, he resigned his distributorship with AbundaVita and joined Nutri-Bio, another direct selling company. In 1960 when Nutri-Bio expanded into Canada, the founders selected Rohn as a vice president for the organization. In 1963 at the Beverly Hills Hotel, he gave his first public seminar. He then began presenting seminars all over the country, telling his story and teaching his personal development philosophy. He was the recipient of the 1985 National Speakers Association CPAE Award for excellence in speaking. He wrote several books include: The Seasons of Life, 7 Strategies for Wealth & Happiness, The Five Major Pieces to the Life Puzzle, The Art of Exceptional Living, The Treasury of Quotes, Leading an Inspired Life, Daily Reflections, The Keys To Success, The Day That Turns Your Life Around, Twelve Pillars (novel, with Chris Widener), Strategies of Prosperity, and How to Become a Millionaire!.